The end of an eventful May 2015 is fast approaching and so I thought I would briefly recap the month’s articles. We start with the government action that explains why so many refugees and asylum seekers end up in drowning at sea and end with the government action that explains why I haven’t had my garbage collected for over a month. Whenever people in government act (i.e. use coercion) with good intentions of making the world a better place invariably someone is harmed. A truth we should never forget. Thankfully there’s many more people in society than in government.

“The root cause of this particularly tragic social problem, then, is well-

intentioned collective European government action aimed at ‘improving’ society. There could be no finer and sadly no more tragic lesson in the unforeseen consequences of using coercion against innocent people (i.e. airlines) than the thousands of asylum seekers who die at sea every year as a result.”

Why I won’t be voting in the General Election

financial alleviations. It cannot, however, alter the course of our Titanic economy such that it is not going to hit that iceberg looming ever larger on the horizon. We can’t build peaceful and prosperous societies through the State. Human progress doesn’t happen through States and Empires. They shatter and halt its progress. Peace, prosperity and progress can only be achieved on a foundation of individual liberty, which we currently don’t have…”

“It can’t be right (can it?) when the near future of one of the world’s most prosperous societies is not

bright but bleak; not promising but perturbing; not obliging but oppressive. It can’t be right when it feels like a victory to have potentially minimised the harm that is going to be done to our standard of living and our freedoms by the institute that is supposedly necessary for our society to exist – that supposedly enacts the will of the people. This must be a sign that something is fundamentally wrong with our society’s political structure.”

The secret shame of Tory voters & the fanciful fears of Leftists

“The Labour voter’s not only got your back, but he promises to give you a back rub every time he could really do with one. The Conservative voter, on the other hand, seems like a guy who will stab you in the back as soon as it becomes beneficial for him to do so. And never give you a free back rub.”

police, however, do because this group of people are so rarely punished for causing harm or death by violence or aggressive use of their firearms. That’s the significance of impunity, which is an inherent feature of law enforcement and conflict resolution monopolised by the State.

The truth is that ‘taking all the guns away’ is utopian thinking, it could only happen and indeed be desirable in a world where no one ever needed to defend themselves or their property; in other words in a world of perfectly virtuous human beings whose emotions never determined their behaviour.”

“If this episode at Goldsmith’s college in London is at all indicative of what’s happening on university campuses throughout the UK, then it seem our centres of higher education have become society’s most fertile breeding grounds for racism and sexism. Which is surely the ultimate corruption of the institute of the university.”

enforced equally, even if they think same-sex parenting is problematic, should vote ‘yes’. Everyone who believes that the State should not restrict people’s freedoms to enter into contracts at the behest of one group of people who want to force everyone else to act according to their own beliefs should vote ‘yes’, even if they have doubts over the virtue of same-sex parenting.”

We can’t all be kings with the right to cake

“The truth is if we become enchanted with the fantasy of living in a world where the State punishes people for not doing what we want them to, then in reality we want to live not like human beings in a free and imperfect society, but like slaves in an unfree and perfectly controlled society. We can’t have our cake and eat it.”

“Due to strike action by our local garbage men we have not had our garbage collected for nearly 4 weeks. 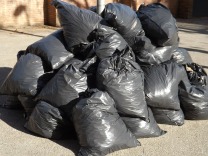 No one in our town has. According to our local government it will be at least 5 weeks before any garbage may be collected again. For goodness sake can we please just ditch our unthinking faith in government-run public services and let free markets, which work wonders all around us every day of our lives in every aspect of our lives, do the same for refuse collection – and end this madness.”

The welfare state is a false bottom

“Let’s face it, if it wasn’t for the welfare state then Richie and Eddie would either be dead (and no one would care!) or else more likely working in a supermarket. As men who acquire resources peacefully through economic exchange they would be contributing to the creation of society’s life force, wealth, and not merely draining the wealth created by everyone else into the black hole that is their own self-destructiveness by means of the dole. That wouldn’t make for a comedy, but it would make for a better society.”