The Right to Self-Determination Is Not Subject to Majority Approval 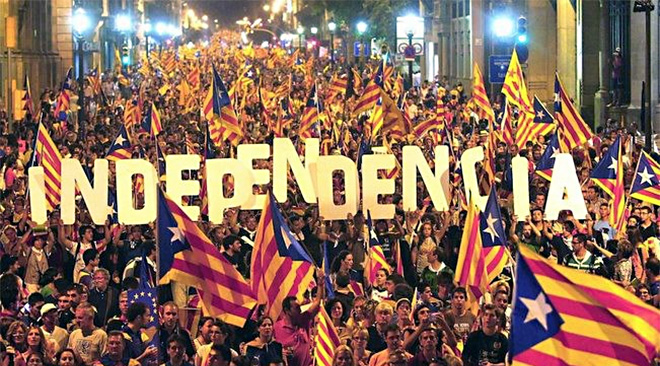 Recently, the BBC reported the Spanish government is considering holding a nationwide referendum on changing the constitution to allow for legal independence referendums.

We’ll see if this happens or not. But the very notion of holding a nationwide referendum to this end is nonsensical. Human rights don’t come from majority support – or indeed from a nation’s constitution.

To paraphrase Ayn Rand, the right to self-determination (or any basic human right) is not subject to a public vote; in this case, a majority of Spanish people has no right to vote away the rights of Catalans. And yet, the Spanish government is proposing that it does.

The English Enlightenment philosopher, John Locke, called this natural law – rights by virtue of human nature. During the 18th century, the idea that restricting the liberty of individuals was a violation of God’s law, a sin, came to be widely accepted.

This ethical theory more or less held sway over the minds of men for a couple of centuries, keeping governments in the western world relatively restricted – enabling rapid wealth creation and a great lift in the general standard of living. But the unscientific premises of natural law theory proved its Achilles heel.

The temptation to use and expand state power was too great. Eventually, ‘progressive’ and utilitarian theories of using the modern state to centrally plan great societies swamped the intellectual arena, and the question of ethics was dismissed as unscientific or irrational. Paving the way for statism, the dominant political philosophy of our age.

Thankfully, the ethical argument for human freedom has advanced. It has an entirely rational foundation and as such is stronger than ever. The best freedom thinkers of our age have demonstrated that, essentially, the libertarian private property ethic is the only valid ethic. (Read this primer to be walked through the reasoning and to be introduced to its philosophical underpinnings).

The libertarian private property ethic isn’t going to convince governments around the world to stop what they’re doing. Of course not. Having power means you don’t have to act according to reason. That’s the appeal of it.

But it’s vital that individual liberty is ready and waiting to be widely accepted as the new political ideal when the descent of state-controlled societies into tyranny and economic disaster can no longer be denied.

Here’s an analogy for the way Spain’s ruling elite conceives of the rights of Catalans. Imagine a man who wishes to terminate his contract with his current employer. He hands in his notice and on his last day his boss prevents him from leaving the building. The man tries to get out but some security guards emerge and pin him down.

His (former) boss says he understands how he feels, but it’s only fair if everyone at the company gets to decide whether he can leave the company or not. So he’ll have to wait until they’ve voted on whether he has the right to determine his own employer. Only if they vote ‘yes’ can he leave.

Such behaviour by any commercial, religious or charitable organisation in society would be universally condemned as immoral and a clear violation of a person’s rights. A man’s right to choose his own employer derives from reason, not from the approval of other people.

A referendum on whether it should be legal for regions to hold independence referendums will be a win-win situation for Spain’s ruling elite. It will put the Spanish people in an invidious position.

A no vote, which seems most likely, will shift the anger and resentment of Catalans towards their Spanish family, friends and colleagues and away from those whom it was rightly aimed at previously: Spain’s ruling elite. That group of people who desperately want to continue ruling over Catalans for the sake of funding their pet schemes and for the sake of their egos.

A yes vote, on the other hand, will please everyone except a minority of Spaniards, but that won’t be a problem for the Spanish government. A minority of Spaniards is unlikely to possess the will to start demanding political autonomy in the same way Catalans have been for decades.

The only way to stop the Spanish government from shifting blame and responsibility onto the Spanish people is for the latter to not turn up at polling stations. Just don’t vote. Refuse the power and refuse to make the decision.

If the Spanish people don’t reject the notion that they have the right to decide what rights Catalans have, then they, and not Spain’s rulers, could be held responsible by generations of Catalans for whatever befalls them in the decades afterwards. Which could have a negative effect on the standard of living of both peoples, who will be political neighbours, if commerce is subdued by this ill-feeling.

The Spanish people must resist the temptation of being king for a day over the Catalan people. Refusing to wield the axe of state power will send a message of understanding and solidarity. It will show Catalans that the Spanish people understand it is not their right to determine whether they can be their own nation.

It will also show that they stand with the Catalan people and not with those in state power, who tried to prevent the former from expressing their peaceful political will by deploying the police as oppressors instead of protectors.

Some may argue that, in line with democratic principles, the Spanish constitution cannot or should not be changed without a referendum of the Spanish people. But this fails to take account of a crucial caveat in contract law: not all clauses in all contracts may be justifiably enforced.

Assuming for the moment that there can be such a thing as a social contract, the clause in the Spanish constitution that makes holding independence referendums illegal violates people’s rights; it violates the libertarian private property ethic. Therefore, enforcing it cannot be justified.

Thus everything the Spanish government has done (enacted through the police and the courts) to uphold this part of the constitution was unethical and criminal. Spain’s leaders should be prosecuted for organising mass violence and theft. But they won’t be, of course.

As elected officials, they act on behalf of the state, which in practice means their political actions are not subject to the same legal restrictions which the actions of private citizens are. Spain’s ruling elite may be able to avoid being held accountable by the laws of their own land for their own actions, but even they cannot evade being held morally accountable.

When the world saw Spanish police raiding properties and assaulting people who just wanted to tick a box on a piece of paper, the state’s mask slipped for just a moment and we got a brief glimpse of the truth: the people in state power are our masters – not our protectors, enablers or saviours.

For some people, that image stays with them and they never think of the government in the same way again. Whereas others go into denial, preferring to revert back to seeing the smiling face of benevolent government, instead of the dead-eyed stare of state brutality.