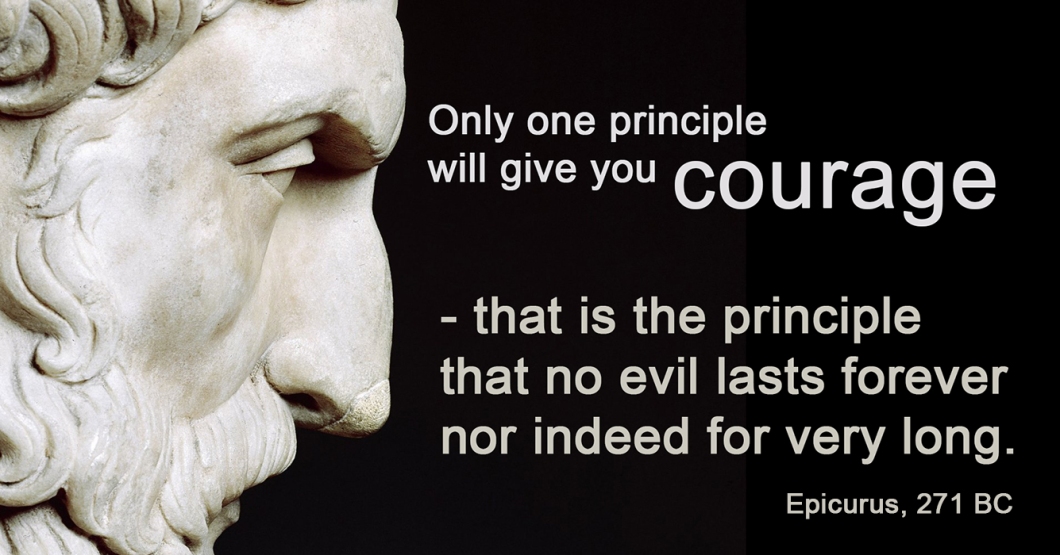 On the eve of a U.S. presidential election, which will make either a fascistic billionaire or a sociopathic war-monger the most powerful person in American and indeed the entire political world, it might seem more difficult for those of us who haven’t become entranced by the siren call of Trump or Clinton to find motivation. But I’ve always found this quote from Epicurus helpful.

It’s true. Just as the laws of nature mean nothing lives forever, the laws of economics means no evil lasts forever. Dictatorships don’t wither away, but they do eventually destroy themselves by destroying that which sustains them – individual economic liberty. Every dictator wants his system of rule to last forever and believes it will, but every one was and is always blind to the fact or refuses to see that violence always achieves the opposite of its intended aims.

To find hope, one needs only consider that human progress has continued despite countless rulers over the past six thousand years attempting to fix, control and plan the world according to their own will. How encouraging, is it not, that every one of them failed.

Yes, they all, for varying degrees of time, basked in the delusion that they were sweeping Man towards heaven, but in reality they were only ever keeping him down in an earthly hell.

And yet, here we are. The wealthiest, longest living and most free human beings in the history of civilisation – who, incredibly, have instant access to the sum of all of human knowledge. If the last two millennia has taught us anything about ourselves, it’s that the human instinct for good and the human urge to flourish can be interrupted but it cannot be stopped. If the last few centuries has taught us anything, it’s that production by the masses for the masses – capitalism – is the key to and only way of supporting growing populations and raising the general standard of living.

The Trumps and the Clintons of this world, like all rulers of the past, have the power to interrupt human progress according to their deluded schemes. But the combined forces of capitalism, the Internet and Internet technologies means that State edicts are no longer like giant dams that slow the flow of human progress to a trickle, but rocks. Obstacles that we, the masses of the 21st century, have the creative power to keep human progress flowing around in every direction possible.