Accept the Reality of Statism, but Not the Morality 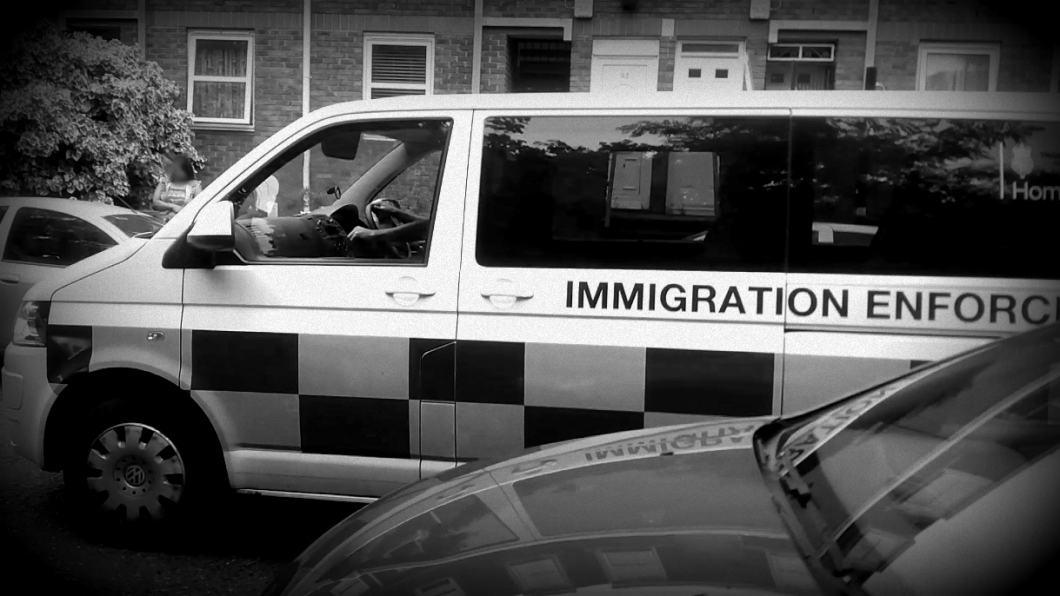 Today, I saw a Immigration Enforcement van parked outside my place of work for some time. I was only very vaguely aware that such things existed now, so it took me by some surprise. I was reliably informed that Immigration Enforcement officers have legal authority to forcibly rifle through any business’s employee records and to detain (kidnap) any ‘illegals’ they find.

Even though I’m not an immigrant, as I stared at that van, I felt further from free society and closer to some Orwellian dystopia than ever before. At that point, it became clear to me that I must accept the reality of statism, but never the morality of it.

No, it’s not that the only reason this is happening is because of ‘brexit.’ It’s bigger than that and it’s because of something that started a long time ago. It’s one of the inevitable results of the widespread belief in the imaginary lines we call borders and the illegitimate ownership/authority of/over a geographic area by the criminal organisation we call The State. Which, as an idea, has proved to be the single biggest obstacle to and destroyer of peace, prosperity and progress over the last several centuries.

Wars still happen and poverty still exists because most people everywhere still believe in the social necessity and moral virtual of the State; they still believe that we need to grant a group of men a monopoly on the use of force for society to function at all and then, usually in time, grant them further power to plan its economy (which is to say people’s lives) to some degree or other – i.e. the ‘mixed economy’ model most common in the world today.

The problem being, from the perspective of human progress everywhere, that it is not yet widely understood and accepted that this is impossible. Centrally planning society such that everyone’s standard of living keeps rising (as it does under capitalism) is an economic impossibility and thus an end not achievable in reality. (The logical proof of this was set out by the great economist Ludwig von Mises in the early 20th century).

The reason we’re not all driving around in flying cars already, having our shopping delivered by drones and having robots cleaning our houses is because of the drag on wealth creation and technological progress exerted by states the world over. Despite this drag, despite the existence of states, humanity is still progressing (global poverty is shrinking) and technology is still advancing at what seems to us to be a rapid rate anyway.

This is testament to the creative power of capitalism, which is to say the collective wealth creating power of the common man’s unrestricted use of his creative/productive energies. Which we owe our standard of living, our health and our long lives to.

Also today, on the way home, I noticed a chap watching the third televised presidential debate between Trump and Clinton on his phone. He had earphones in. He was interested, definitely. Fascinated, very possibly. I wondered whether this was a perverse slash morbid fascination, as with gawking at a car crash, or whether it was a genuine one. I suspect it was the latter, but even if it was the former the effect is the same.

Observing this man prompted reflection on how most people fall every time for the confidence trick played by politicians like Trump and Clinton. We buy it. We believe that because they’re on a podium and speaking to tens of millions of people that they deserve such a platform and all this attention. There must be a reason for it, we tell ourselves. We believe that because they speak so sincerely and confidently about their ideas and plans for economic growth, equality, justice et al that they must be at least capable of making them happen.

But the truth is they’re not capable and they’re not deserving of a platform from which to speak to half the world. The reality is that they can’t do any of the good things they are claiming they can through government action (they can do all the illiberal things, however). The only way they can start ‘making’ the economy grow again or ‘creating’ jobs is indirectly through inaction of government and not directly through government action, which renders those verbs incorrect and their claims false.

That’s because government, as distinct from society, doesn’t create jobs or economic growth or indeed anything; it plays no positive role in creating prosperity and progress; other than enforcing people’s property rights, which is not a positive action requiring unjust use of force but a reactive one requiring legitimate defensive force. Government is only good for enforcing a man’s rights. It is worse than useless when used with the intention of improving people’s lives.

No man or woman, or group of people can or possibly could use government force to make everyone better off – no matter how much government power, tax revenues or borrowing credit they have at their disposal. Even if we rounded up the most brilliant minds alive today and paid them handsomely for directing their energies towards planning society to make everyone better off, they couldn’t do it!

It still wouldn’t happen. They very best they could do is not leave us worse off as a result of their efforts to make us better off. This is a profound truth that most people are still yet to grasp.

So totally convinced of their own ability and of their own virtue are politicians, however, that we become convinced of it. We want it to be true that they can make us all better off and society better and so we willingly suspend our disbelief. Just as we do when we watch TV, a film or a play.

Some people hand over money to men who promise them a quick way to get rich because they so desperately want it to be true that there is a quick and easy way to get rich. People vote for politicians because they want it to be true that the person on the podium can do everything they are promising to do. Create jobs, make us safer, help the poor, save the planet. Whatever it may be.

The common man’s unrestricted use of his creative and productive energies is what creates wealth and leads to human progress everywhere and the conditions for peace. But we don’t engage in economic exchanges with each other because we’ve all agreed to achieve general human flourishing and progress. And we don’t need to. Which is good because it’s hard enough to get ten people to agree on something, let alone billions.

Prosperity and progress results naturally from of each of us pursuing our own self interest; it happens as a result of billions of people seeking to fulfil their needs, wants and desires through economic exchange. For the last centuries this has been happening whilst generations of people elected into power have unwittingly or without care erected ever more obstacles to doing so whilst absorbed in the endless struggle to think of themselves as heroes of humanity (to paraphrase T.S. Eliot).

The desperate irony of centrally planning people’s lives via government action, which most of us are yet to recognise because it’s difficult to see with the economically untrained eye, is that it makes it more difficult for everyone to plan and act towards achieving it themselves – which is to say, at all. Because only you know (or have the best idea of) what you want most today, next year or from life and only your (peaceful) action can acquire it for you – without taking anything by force from others (or being given property by politicians which was taken from others by state force).

The Immigration Control vans roaming London looking for people to kidnap and that man’s belief in the better-world-making power of politicians are directly related. Widespread belief in the virtue of Statist Authority (i.e. systematic use of aggression) ultimately enables the exercising of it against innocent people by State employees who in turn believe they are making the world a better place.

If ever that man on the train sees the connection between his belief in authority and the Orwellian shit that’s happening right now, which I think he and most others eventually will, he will be shocked to see a yawning chasm between the laws in our society and the morality in our hearts. He too may then resolve to accept the reality of statism but not the morality.