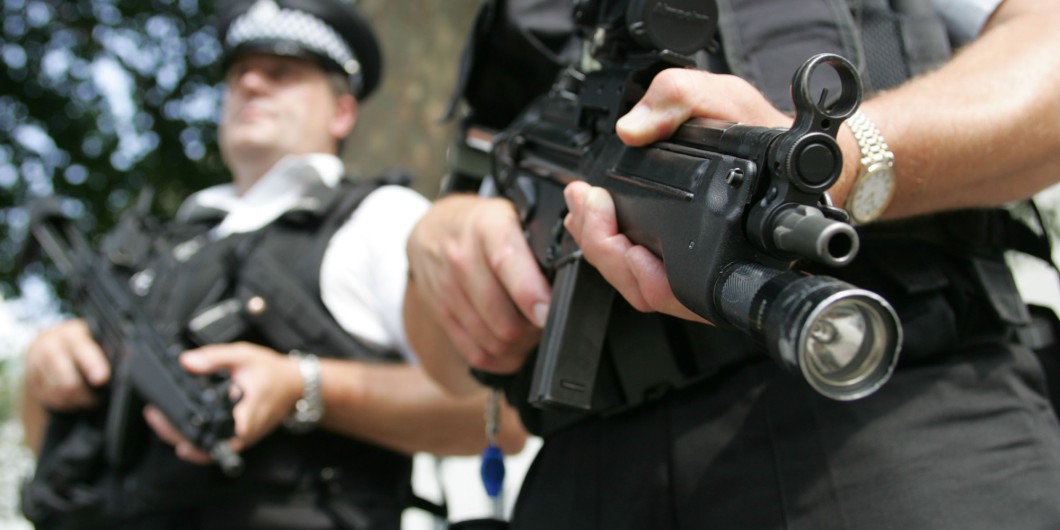 The London Metropolitan police announced yesterday that more armed police are to be seen on patrol in London. The total number of armed officers will increase by 600 to 2,800. These will be firearms officers carrying semi-automatic weapons with the primary objective of killing terrorists, rather than bobbies on the beat protecting person and property of citizens and peacefully resolving conflicts.

As a Londoner, I’ve noticed armed police already. For instance, I saw two at Waterloo station last weekend and I sometimes see them at the station I exit to go to work. As a Londoner born and raised, the Met’s decision to deploy a lot more armed officers on patrols in London saddens me.

It’s not that I don’t understand the reasoning behind it or that I’m surprised that it’s happening, but a London swarming with heavily armed state agents symbolises the abject ethical and social failure of statism. And as no amount of state security can protect us from individual acts of suicidal terrorism, who would bet against this being only the beginning of increasing numbers of armed police in London.

The saddest thought is that Londoners will eventually normalise seeing armed police officers here, there and everywhere. In time, we and future generations will think it’s normal and reasonable to have to explain to an armed man who you are or where you’re going. Or to produce identification when asked for it. Or to take orders and comply as we walk through our city as supposedly free citizens.

Or we’ll begin to think it’s understandable and reasonable for someone to be shot dead on the street who resists police harassment and arrest for violating some petty or unjust law. We’ll begin to slip into a mentality that has become common among Americans: If he had just complied with the police officer’s demands then the law enforcer wouldn’t have had to shoot him.

The British public and the media tend to be highly confident that ‘our’ police will never get like that. It’s true that British police aren’t like American police at present – relatively few die at the hands of the former – but to think they are immune from becoming Americanised is naivety born of national pride and a collective superiority complex.

More guns in the hands of patrolling British police officers will almost certainly mean more deaths of innocent people and of criminals who didn’t deserve to die, who will likely be from racial and ethnic minorities. Furthermore, when the threat of terrorism has diminished, will these officers retreat from the streets of London or will they remain? If I had to put money on it, I would bet on the latter.

As a life-long Londoner and a human being, I cannot help but think to myself “how did we get here?” and reflect once again on the sequence of events that lead to this grievous state of affairs.

Elected politicians (using other people’s money) fund Middle Eastern terrorist groups to manufacture favourable political outcomes, and bomb Middle Eastern territories in the name of spreading western democracy to improve people’s lives. Lots of innocent people die and lots of lives are ruined. People want revenge against the evil done to them. (And evil it was).

Some use the ethical theory of Islam to morally justify killing innocent westerners and to rationalise that violence as the virtuous doing of God’s will. Zealous and sociopathic types who want to die as virtuous heroes dedicate their lives to destroying western society.

Life for westerners becomes less safe. Governments vow to keep us safe by ‘temporarily’ restricting our civil liberties, and by having thousands of armed men with licenses to kill roaming the streets of great cities that peaceful, productive people built.

This is the road map of how the well-intentioned use of the state’s legal powers to steal and to kill (by both the political Left and Right) fails to make the world a better place. Violence begets violence. This has always been true of human affairs, on the individual scale and on the scale of nations.

Only a major shift in the public opinion of the State will end these cycles of violence. Which are set in motion not by the will of the masses, but by powerful and power-seeking minorities with monopolistic control over the property and minds of the masses via the mechanisms of the State.

As a Londoner I sense it and I see it. London is changing. The atmosphere is souring. There’s a sense of tension, of uneasiness that is above the usual level that comes with a big city. Not just because of the threat of terrorism, but just as much because of how Authority in London is reacting to that threat. The State message ‘we will do whatever it takes to protect you’ seems to echo loudly throughout London.

You can’t walk past a heavily armed soldier slash police officer and not feel threatened, regardless of how unthreatening the man with a large weapon draped over his chest is trying to be. It’s human nature. The threat of deadly state force looks you in the eye and it hangs in the air when police helicopters fly over, which is often. At the moment, escaping this threat and finding sanctuary in a side street or park isn’t too difficult, but it will soon become much harder to feel free from it.

Some days, when I catch the eye of an armed police officer or hear the rumble of a police helicopter I suddenly feel more a prisoner trapped in London than a free citizen living in London. That’s not what living in London or indeed anywhere should feel like.

Benjamin Franklin once declared that “security without liberty is called prison.” For Londoners in recent times, it’s been hard to feel free from the threat of terrorism, this is true. But it will soon become more difficult to feel free from being generally threatened when even more heavily armed police officers hit the streets in the name of minimizing lives lost in future terrorist attacks.

The defining characteristic of the State as an institution is its lack of regard for human life. We can only hope that London’s impending army of firearms officers, against all incentive, act with regard for ours. And that’s the problem with expanding state power; it leaves citizens with so little power that all they can do is hope – hope that the person staring down the barrel of his gun, who has the full and insurmountable force of the state behind him, sees a human being in front of him, and not an obstacle on the illusory path to peace and progress.