Islamic State: a mirror the west is afraid to look into 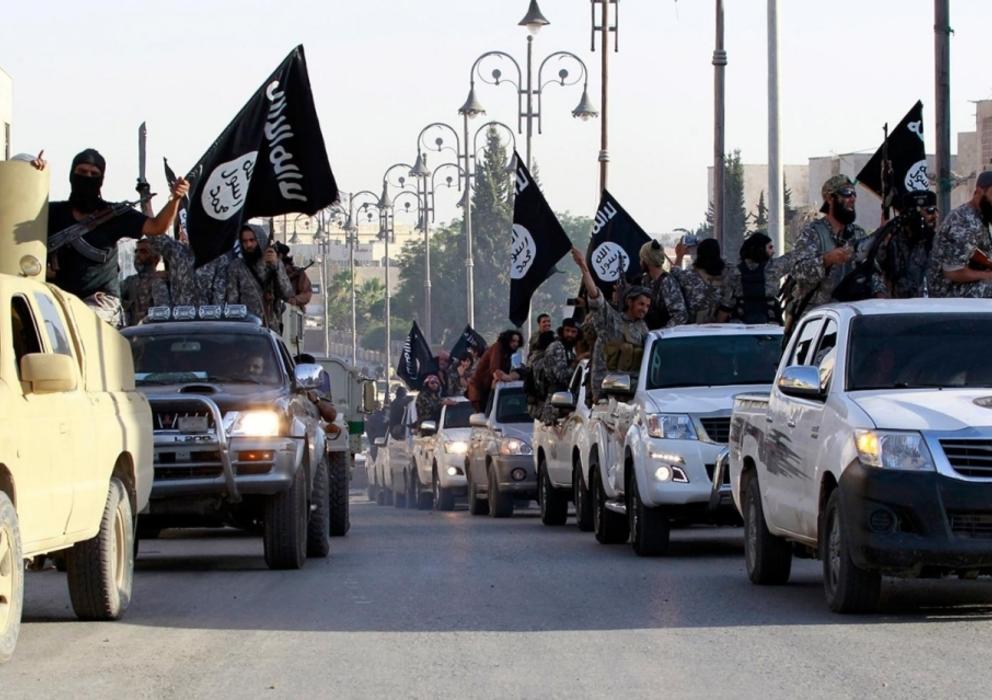 About a month ago a trio of NY Times journalist wrote a piece entitled “Predatory Islamic State Wrings Money From Those It Rules“. What is remarkable is that the reader can substitute ‘Islamic State’ for their own nation State and it doesn’t change the accuracy of the piece. It could easily be mistaken for a satirical piece by The Onion, but it was, of course, written in all seriousness. That in itself is also remarkable.

The authors begin by telling the story of a businessman named Mohammad al-Kirayfawai, who every three weeks “… hands $300 to fighters from the Islamic State for the privilege of driving his refrigerated truck full of ice cream and other perishables from Jordan to a part of Iraq where the militants are firmly in charge.”

They go on to explain that “…the fighters who man the border post treat the payment as an import duty, not a bribe. They even provide a stamped receipt, with the logo and seal of the Islamic State, that Mr. Kirayfawai, 38, needs for passing through other checkpoints on his delivery route.”

This is exactly the kind of plain statement of fact that is met with ridicule or else dismissed out of hand in western political and intellectual circles whenever a libertarian makes such about the institutionalised, systematic and much more efficient predations of any given western State.

The authors explain the harmful consequences for locals of refusing to comply with IS and in doing so reveal they recognise that IS agents are trying to create the illusion that their demands for money are legitimate.

“Refuse to pay and the facade of normality quickly falls away.” “If I do not,” Mr. Kirayfawai explained, “they either arrest me or burn my truck.””

From their use of language it is apparent that the authors comprehend the immorality of the behaviour of IS agents and sympathise with the innocent person being preyed upon. And rightly so. But if this were a libertarian speaking of agents of a western State, then strangely this sympathy would shift towards the aggressor and away from the victim. The State agents would be perceived to be doing what must be done and the citizen’s complaints would be considered naive, misguided or selfish.

This facade that the authors speak of exists in interactions with our own native State agents too. But it remains erect because the government official standing in front of you never does the violence himself. No, no, he’s smiling. He’s not going to steal your stuff or hurt you. He wants to help you.

Intellectually we understand the threat of violence for non-compliance exists, but it’s not actually present at that moment in your conversation with the tax inspector, the parking officer or the health and safety inspector. There’s no gun. The threat is an abstraction, until, that is, the police (the agents who do the dirty work) kick your door down. Then, and only then, does it becomes real enough to trigger the fight or flight mechanism in our brains. The vast majority of citizens never resist long enough to reach that stage, of course. It’s just not worth it. Much easier to pay up and get on with your life.

The harmful consequences faced by Mr. Kirayfawai in Iraq are essentially the same ones facing citizens of every developed nation every second of their lives from birth to death. We either lose our freedom or we lose our property if we refuse to pay or do what the State demands of us. The extortion Mr. Kirayfawai faces is cruel, but by no means unusual on Earth today.

The only difference is that western States don’t usually destroy people’s property; they issue fines instead. Lots of them. Stealing property better serves the State’s ends than destroying it. Governments of established States know this. Future members of IS will learn this.

The article featured a photo from an Islamic State website that, according to the authors, showed “…a member sorting envelopes of zakat, or alms, collected from the rich to be distributed to the poor during the Muslim holy month of Ramadan in Mosul.”

Given that Islamic State takes from the rich to give to the poor, western intellectuals who argue that a western State’s violent means are justified by ends that are beneficial to some should, to be consistent, support IS and desire its flourishing. The only grounds they could potentially oppose it on is the way in which its authority was established. They would probably argue that IS’s authority was established by force and not by consent of the people, or by ‘social contract’. But this is to argue that every western citizen is always willing to hand over their property to the State, for whatever purpose. But if this were true, then the State wouldn’t ever need to fine or imprison people; it wouldn’t need to use coercion at all. But it does need to and it does do so.

The one very profound difference between IS and western states is that the people from whom the former wrings money haven’t yet had centuries of time to delude themselves into believing the State’s exclusive use of force is for their own good and that society could not function without it.

Islamic State is a mirror that the western world is afraid to look into. Some of those that pluck up the courage to don’t see what is really staring back at them, but instead what they want to see. They don’t see the reflection of their own predatory State, but instead one of a socially necessary and virtuous institution; one which enacts the will of the people and has their permission to use force against them. They see an imaginary beauty instead of the real beast.

Some westerners, on the other hand, I hope won’t fail to see the true nature of their own State reflected in the raw, undisguised brutality of the Islamic State. If the emergence of IS enables many more westerners to recognise the true nature of the State they live under, then there is something to be gained by humanity in the long-term from what will otherwise be a peace and prosperity endangering period of guerilla warfare between IS and the west.