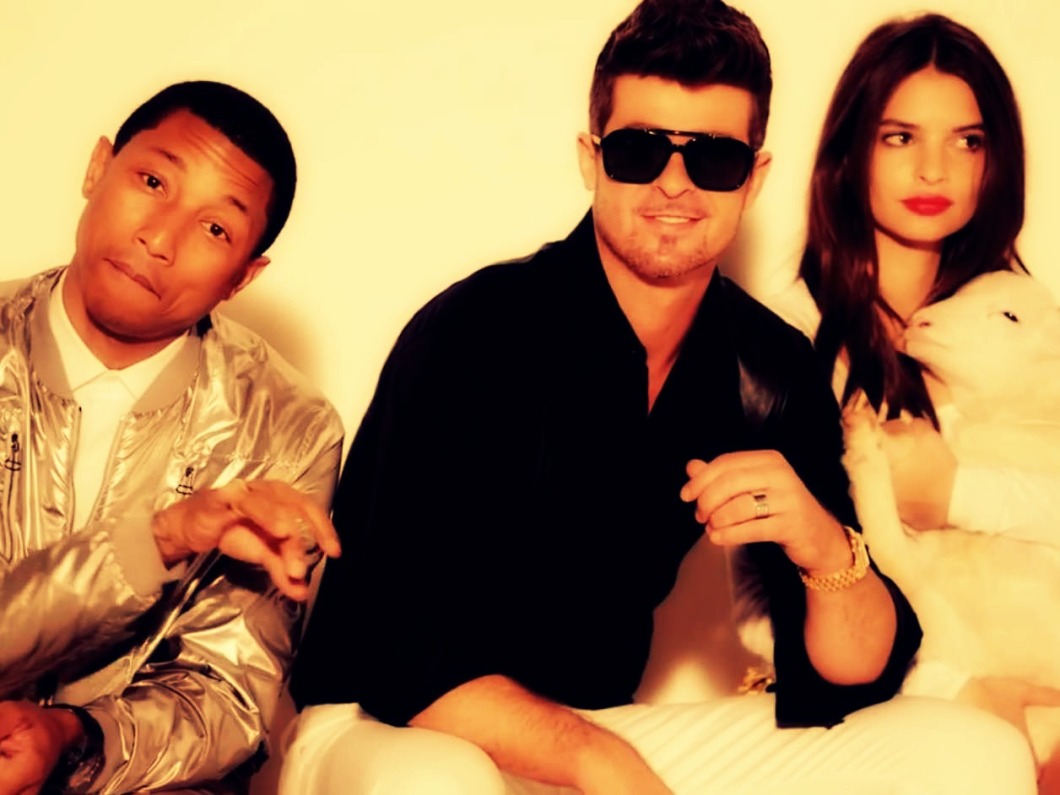 The big news in the music world this week has been the unanimous decision by a Los Angeles jury that Robin Thicke’s 2013 Pharrell-composed hit ‘Blurred Lines’ plagiarised Marvin Gaye’s 1977 disco foray ‘Got to Give it Up’. They pair have been ordered to pay $7.2 million to Gaye’s family who inherited the copyright to his music.

How ironic that the title of the song at the heart of this copyright claim is also a good description of the effect that the concept of intellectual property has on the logical distinction between ideas and property: it blurs the line.

Copyright claims are no doubt happening all the time, but this high-profile one has prompted a particularly heated reaction from those in the music industry and the public. What’s fascinating about the web chatter that’s been happening all week is that, from what I’ve seen, it’s been mostly disapproving of the ruling.

I wonder if the Blurred Lines ruling hasn’t for many shone a bright light on the usually unseen dark side of copyright law and the concept of intellectual property. Perhaps this ruling has prompted many musicians and music lovers to reflect more deeply on the idea. Maybe now in many people’s minds copyright law suddenly seems to be more predatory than protective, more chilling than comforting.

The degree to which it does depends on whether people perceive the case against Pharrell and Thicke as an abuse of copyright law, that is an instance where the purpose of copyright has been perverted to achieve an end that it’s not supposed to, or as an inevitable outcome of the exercising of the rights granted by intellectual property law.

Copyright is “the exclusive legal right, given to an originator or an assignee to print, publish, perform, film, or record literary, artistic, or musical material, and to authorize others to do the same.”

The question is whether this is and can be a legitimate right; does such a right necessitate violating the rights of others? This is one issue that divides some libertarians. There are those who argue that such a legal right cannot be moral because it requires the initiation of force to enforce it and those who argue that it doesn’t and therefore can; or that even though it does violate the non aggression principle an exception should be made, based on the belief that not doing so would seriously retard economic progress.

As far as I can tell the best reason and evidence shows that intellectual property rights cannot be enforced without violating the freedom of others to use their property as they wish; and that historically copyright and patents have not been as crucial to economic progress as we might think.

The two best arguments, one from principle and the other from consequences, have been produced by Stephan Kinsella in his book Against Intellectual Property and Michele Boldrin and David K. Levine in their book Against Intellectual Monopoly. The former is a practising patent attorney and well-known libertarian writer, the latter are mainstream economics and not confessed libertarians who argue that “the downstream licensing agreements implicit in current intellectual property law are anti-competitive and that there should be a presumption for intellectual goods as with other goods that competition is likely to outperform monopoly.”

Stephan Kinsella has produced the strongest argument so far against intellectual property, one which I think is gaining more acceptance amongst libertarian circles as time goes by. I highly recommend reading his book, but here’s some enlightening excerpts and his compelling conclusion:

“At most, my use of this idea will diminish its value to the inventor by hampering his ability to monopolistically exploit it. As we have seen, however, one cannot have a right to the value of one’s property, but only in its physical integrity.”

“Further, ideas in one’s head are not “owned” any more than labor is owned. Only scarce resources are owned. By losing sight of scarcity as a necessary aspect of a homesteadable thing, and of the first occupancy homesteading rule as the way to own such things, Rothbard and others are sidetracked into the mistaken notion that ideas and labor can be owned. If we recognize that ideas cannot be owned (they are not scarce resources), that creation is neither necessary nor sufficient for ownership (first occupancy is), and that labor need not be “owned” in order to be a homesteader, then the trouble caused by these confused notions disappears.”

“It is simply not legitimate to restrict the use to which an owner of property can put it unless that owner has contractually obligated himself or has otherwise acquired the information by a violation of the information-holder’s rights. Talk of reserving the right to copy is merely a way to avoid the contractual notion that only parties to a contract are bound by it.”

“We see, then, that a system of property rights in “ideal objects” necessarily requires violation of other individual property rights, e.g., to use one’s own tangible property as one sees fit. Such a system requires a new homesteading rule which subverts the first occupier rule. IP, at least in the form of patent and copyright, cannot be justified. It is not surprising that IP attorneys, artists, and inventors often seem to take for granted the legitimacy of IP. However, those more concerned with liberty, truth, and rights should not take for granted the institutionalized use of force used to enforce IP rights. Instead, we should reassert the primacy of individual rights over our bodies and homesteaded scarce resources.”

Also, here’s an excerpt from an online essay by Boldrin and Levine entitled ‘Why IP is Not IP’:

“…it is true that my drinking from my cup of coffee does not affect your use of your cup of coffee. No one would go on to suggest from this fact that coffee is “nonrivalrous” or a “public good” and that special laws and subsidies are needed in the coffee market. It is true that there is legal protection for cups of coffee – if you drink my cup of coffee without my permission, this would be an act of theft, and you would be subject to various civil and criminal penalties. Economists regard these “property rights” in the manner suggested by Eugene Volokh as securing the fruits of labor, and providing incentive to care for property. But notice that less legal protection is needed for your copy of your idea than is needed for your cup of coffee – while it may be relatively easy for me to steal your cup of coffee by threat or when you are not looking, it is fairly difficult for me to learn your idea without your active assistance. Indeed, it would seem that the legal protection needed would be no more than the legal right not to be subject of physical torture or coercion – a right that we enjoy regardless of the state of copyright and patent law. Be this as it may, there is no serious challenge to intellectual property in the sense of your right to determine to whom, under what circumstances and at what price you will transfer copies of your idea.

All of this brings us to what intellectual property law is really about – a reality that is simply obscured by analogies to other types of property. Intellectual property law is not about your right to control your copy of your idea – this is a right that we have just pointed out, does not need a great deal of protection. What intellectual property law is really about is about your right to control my copy of your idea. This is not a right ordinarily or automatically granted to the owners of other types of property. If I produce a cup of coffee, I have the right to choose whether or not to sell it to you or drink it myself. But my property right is not an automatic right both to sell you the cup of coffee and to tell you how to drink it.”

The absurd conclusions packed like coiled springs within any theory of rights that lacks coherence will eventually have the lid opened on them, spring forth and be manifested as nonsensical outcomes by virtue of the human urge to follow to the fullest extent the logical paths of those theories believed to be correct and just. This is what we are witnessing happen with copyright and patents. Musicians, artists, lawyers and judges are following the logic of IP and assuming the rights granted by intellectual property law are legitimate, which is resulting in some crazy copyright lawsuits and plenty of patent wars/trolling.

We can either follow where our reasoning minds lead us and accept that if we treat ideas and property as if they are the same, then it will lead to absurd and unjust outcomes, or we can simply learn from experiences like the Blurred Lines lawsuit. But we must do one or the other if we are to progress.