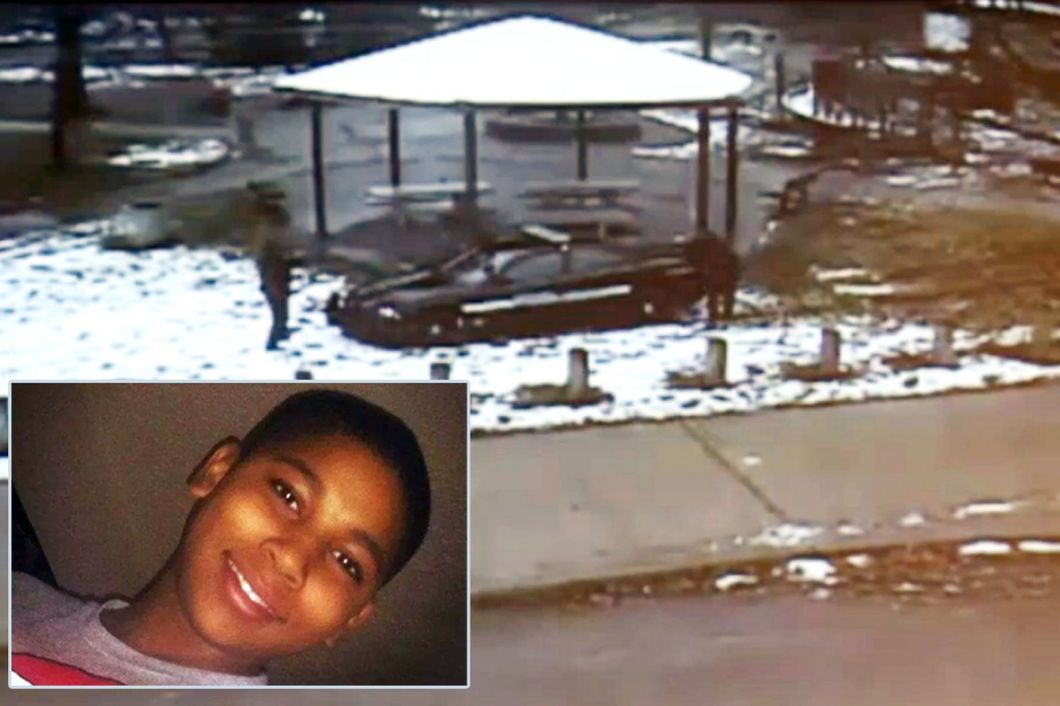 This is the harrowing CCTV footage of a “rookie” Cleveland police officer shooting dead 12 year-old Tamir Rice in a public park.

“A Cleveland officer was less than 10 feet away when he fatally shot a 12-year-old boy carrying a pellet gun near a playground, and video of the shooting is clear about what happened, police said Monday.

The boy was confronted Saturday by officers responding to a 911 call about a male who appeared to be pulling a gun in and out of his pants.

The 911 caller said the gun was “probably fake,” then added, “I don’t know if it’s real or not.” Deputy Chief Edward Tomba said Monday that he didn’t know whether a dispatcher shared that information with responding officers.

The president of the Cleveland Police Patrolmen’s Association has said the officers weren’t told the caller thought the gun might be fake.

Police say Tamir Rice, who died Sunday, had an “airsoft” gun that appeared indistinguishable from a real firearm. Airsoft guns fire spherical plastic pellets and have orange tips to show they aren’t real firearms, but police said the one the boy had didn’t have the bright safety indicator.

Authorities said the boy was told to raise his hands and was shot when he pulled the pellet gun from his waistband, though he hadn’t pointed it at police or made verbal threats.”

As some have already commented, the most striking thing about the incident is how little time there is between the police officer arriving and the child being shot. The video is blurry, but it certainly looks like it’s really only a few seconds at most.

After watching this footage a few times it struck me that, rookie cop or not, these were the actions of a frightened adult who lacked the physical courage to approach a child in an authoritative but non-threatening manner, and establish what exactly he had tucked into his waistband. If the police officer had been able to remain calm and composed enough to do this, had been brave enough to do this, then he could have explained to the kid that: “someone called us out because they think it’s a real gun you’ve got there, so why don’t you take it home before you scare anyone else or, worse, someone tries to hurt you.” Some courage, common sense and a cool head on the part of a law enforcement officer would have meant Tamir Rice’s short life didn’t end that day on a cold, snowy afternoon in a park. And that, for me, is what makes this so tragic.

The fearful and panicky mindset of the two officers is quite evident in the way they remain crouched behind the car for a few moments after the child has been shot, and then in the way they slowly emerge before circling around to eventually approach the body lying on the grass.

Law enforcement and the provision of protection services is a dangerous occupation because you regularly get into confrontations with angry or highly emotional people, which often involve violence. This is why being an officer of the law requires people who are more physically and morally courageous than most. It requires the sort of person who is especially good at controlling their emotions and remaining calm enough to think clearly and act decisively in violent or dangerous situations. Fundamentally, it requires people who desire to and have the bravery to attempt to resolve violent confrontations with the minimum use of force and by inflicting the minimum harm.

It’s most revealing that two armed adult men, both trained in marksmanship, were so panicked by the thought of a child with a gun that one of them decides to kill him almost instantaneously – without making any attempt to establish whether it is a real gun or not. If they were in control of their emotions, thinking clearly and had any desire at all to resolve the situation without using deadly force, then it would surely have occurred to them that there is at least a reasonable chance that it is an ‘airsoft’ or ‘BB’ gun tucked into the kid’s waistband. What is disturbing is that the officer seemed to approach the situation with the goal of wanting to end it as quickly as possible using any amount of force, rather than with the aim of resolving it as peacefully as possible using minimal force – mindful of the fact that a young human life is at stake. Which is why he makes no attempt to establish whether it is a real gun or not.

The officer’s actions reveal that he was acting, primarily, out of fear. Not moral courage. The only way to avoid killing the child would have been to take some degree of risk of being shot (although they had the car for cover) in order to establish whether it was a real gun or not. The officer who fired lacked the bravery to take that risk. His act, then, was a cowardly one. So fearful was he that he was unable to consider the life of the child he was taking aim at. We cannot condemn him for being afraid, for that is human nature, but we can condemn him for lacking the courage as a law enforcer to do the right thing because he could have chosen not to shoot to kill or shoot at all.

Even if the kid’s gun was real, it wasn’t impossible for the two officers to resolve the situation without killing him. They could both have charged at him from either side and easily overpowered him if he refused to relinquish the gun and was actually threatening them or others with it. They just needed to have present in their minds at that moment some desire to resolve the situation using minimal force, and some regard for the child’s life.

I imagine that the “rookie” officer is now filled with the deepest remorse, but it’s too late for him and it’s too late for young Tamir Rice. As a law enforcer you do not get a second chance. That’s why law enforcement officers must have the courage to face the risk that results from refraining from using force until it is absolutely the only option remaining.

Far too many State law enforcers, it seems, are opting to use deadly force when other courses of action are available to them, which is perhaps not surprising given the reality that it is so rare for a police officer to be indicted for killing someone. Far too many are acting out of fear, hysteria or panic, and not on moral courage. Far too many, it seems, have little more physical and moral courage than the average person. Far too many are exactly the kind of person who you don’t want acting as law enforcers, protectors and peacekeepers. Society needs, by which I mean we would all prefer, law enforcers who understand that force is a last resort and who have a desire to use it sparingly and minimally; not ones that are so relieved to have the legal ‘right’ to use deadly force that the moment they find themselves in a situation in which they feel afraid they resort to it within seconds.

In a society of private law enforcement, if a local or park police agent killed a child in the same manner and circumstances in which this Cleveland State police officer did, then I have no doubt that they would be put before a judge and jury and convicted of murder – even if the child had a real gun tucked into his waistband. Let’s see what happens, but it would take a brave man indeed to bet against the State once again declining to indict a State agent, and justice not being done. This reality is one of the fundamental social problems in American society today and no amount of new procedures, reform of the system or promises from State officials will solve it. As long as individuals who represent the State are the only ones who can legally enforce law and punishment for violations of those laws, then those same individuals remain the only ones who can judge and punish their actions; and the disincentive to police officers to refrain from using deadly force will remain insufficient because the cost of doing so is virtually non-existent.