One of the many useful features of Google search is that you can quickly look up the etymology of words. I searched for “anarchy etymology” and Google returned a neat graphic (below), which shows the definition (in this case two definitions) of the word, its origins and a chart showing the usage of the word over time in literature. The latter data comes from Google’s Ngram tool, which allows you to chart the usage frequency of any given word or set of words across 5 million books and over 500 years. 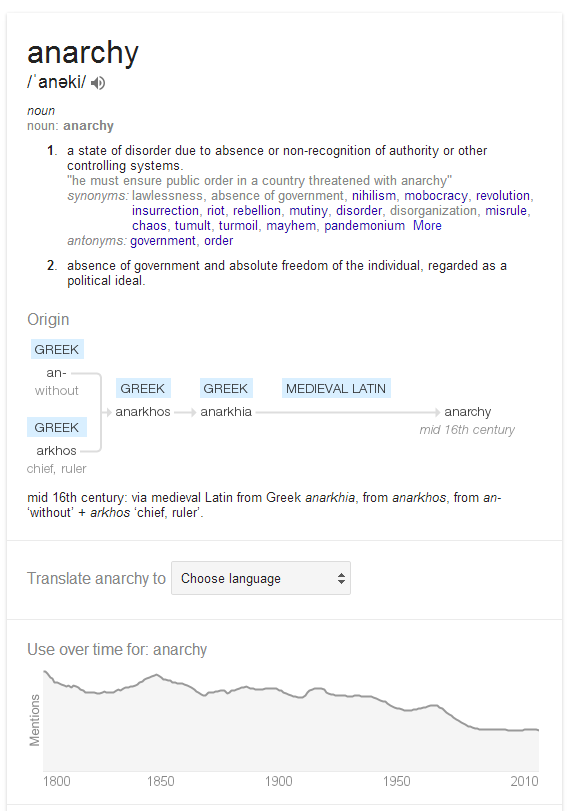 One of the first things that struck me about these results is that anarchy has the most profound identity crisis. We don’t seem to know what it is. It’s either the political ideal for Man (number two). Or it’s completely undesirable chaos (number one). We just can’t seem to decide, so we define it as both (in true Orwellian double-think fashion) and just hope no one notices – or cares. But it can’t possibly be both the most desirable and least desirable state of society because that’s illogical, and so something’s not quite right here.

Perhaps we can uncover the true definition of anarchy by probing deeper. Let’s look at the etymology of the word to see if that gives us any clues. The original and literal meaning of the word anarchy is simple, it is: “without ruler”. Note that the first definition of anarchy supplied above adds a prefix to this: “the state of disorder due to…being ‘without ruler’. This definition refers to a supposed effect of the state of anarchy and not the actual state of anarchy itself. At some unknown point in the past, then, it appears we started to primarily define anarchy by its supposed effects, and not by the actual state itself. At some point this error crept in and has remained ever since. The second definition, however, is equal to the original (and accurate) meaning, but seemingly only exists in order to point out the fact that anarchy is regarded as a political ideal by some; as if to say “anarchy in reality is this undesirable state, but some people believe the opposite”. Like defining God as a fictional entity, but then explaining that some people believe the opposite. Surely this is quite revealing of the prevalent view of anarchy.

Let’s now look at what is implied if both definitions are true. To recap, the first definition is: A state of disorder due to absence of non-recognition of authority. The second definition is: Absence of government and absolute freedom of the individual.

If both definitions are true, then “absolute freedom” for the individual (regarded as a political ideal) leads to disorder, chaos, turmoil, rioting etc. In short, that which would prevent the existence of peaceful societies. Before we assess whether this conclusion is true we need to define what is meant by “absolute freedom”.

If “absolute freedom” means individuals with the legal and ethical freedom or right to perform any action they want to (e.g. murder and theft) without anyone having the right to use force to resist, then peaceful societies would, of course, be impossible. But an ethical system that does not allow for the forceful prevention of any actions at all is the equivalent of having no ethics at all. And so what “absolute freedom” can only mean, then, in this case, is the total absence of any concept of morality in the human mind; it means a reality where all human beings are incapable of empathy. In other words the proposition is: if hurting and killing others was not strongly undesirable to human beings and therefore we didn’t desire to establish the ethical right for everyone to resist such actions, then this would lead to social chaos. But this is merely stating the obvious. Peaceful societies would be impossible if humans didn’t pass down their universal aversion to violence and theft from generation to generation and there was no ethical right to resist it, but, evidently, we do and there is. Today’s societies are possible because only a very small minority of human beings regularly engage in violence – and because the ethics upon which they are founded (i.e. the law) permits the use of force (by the State) to prevent and punish such acts. (Leaving aside the murder and theft committed by the State itself, which the State’s laws prohibit the resistance of).

Therefore, the argument if “absolute freedom” for the individual existed, then peaceful society would be impossible, is true, but it is merely hypothetical. It actually only says something useful about reality when the argument’s premise is false; it says that morality must exist in the minds of a people for the existence of ordered communities where it is permitted to use force in order to prevent or punish acts of violence.

Today’s widely accepted dictionary definition of anarchy goes beyond simply defining what the word anarchy means and asserts or assumes that the state of being “without ruler” leads to “a state of disorder”. This seems to reflect the fact that the vast majority still believe in the necessity and virtue of the coercive entity known as the State. Indeed, it represents one of the many assumptions that form the foundation of people’s moral acceptance of and intellectual support for the State – e.g. without the State there could be no social order, no affordable education or healthcare, no infrastructure, no help for the poor etc.

The graph for the use over time for the word ‘anarchy’ is interesting. It seems the word is occurring in literature approximately half as frequently as it was two centuries ago. More specifically, immediately following a slight rise, the word’s frequency took a sharp dive from around the 1970’s onwards. What might this be a reflection of? This roughly correlates with the relatively sudden and exponential growth in the size and scope of  governments in many of the major democracies. It could mean that, now that the western world’s governments are bigger than ever, the masses fear anarchy far less than they have for a long time. In the 19th century, it seems, anarchy was being mentioned much more often, which perhaps reveals that many more people than today feared it could happen. Under today’s very big and pervasive governments the masses feel almost totally safe and secure, perhaps, and far fewer of them fear a state of anarchy could ever materialise.

Liberty advocates would, I’m sure, interpret this as a bad sign. Trust and belief in the virtue of the State has never been higher, it seems. I would suggest that this is because the government is more active in people’s lives than it has ever been; it’s doing (and spending) more than any governments in history ever have. It’s giving people an income, it’s paying their rent, it’s paying for the raising of their children, it’s helping them buy a home, its raising their wages, it’s imprisoning people for doing non-violent things like possessing and smoking drugs because other people prefer that they didn’t; and much more besides. A great deal more people are more reliant or totally reliant on government than ever. Aside from the significant material need for the State’s handouts, the masses have a greater psychological need than ever to trust government and believe in its virtue; for if the government is not virtuous, then the way they are living their lives and raising their children is also not. As creatures who desire to be good that represents the possibility of realising our worst fear: that we aren’t. Continued blind faith in government is how we hope to avoid ever confronting that horror. If the government can’t be completely trusted, then we are not shielded from all harm in the comfy creases of the duvet of democracy as was believed, but are in fact sitting defenceless in the skeletal hand of the State.

Anarchy means “without ruler”. It means an ordered community free from a coercive authority. It means a world where all human interactions are voluntary or contracted, and therefore peaceful. Anarchy is the preferred state in which billions of people continuously choose to maintain their private relationships with friends, family and co-workers, which is what makes our struggle and failure to define it correctly so curious.