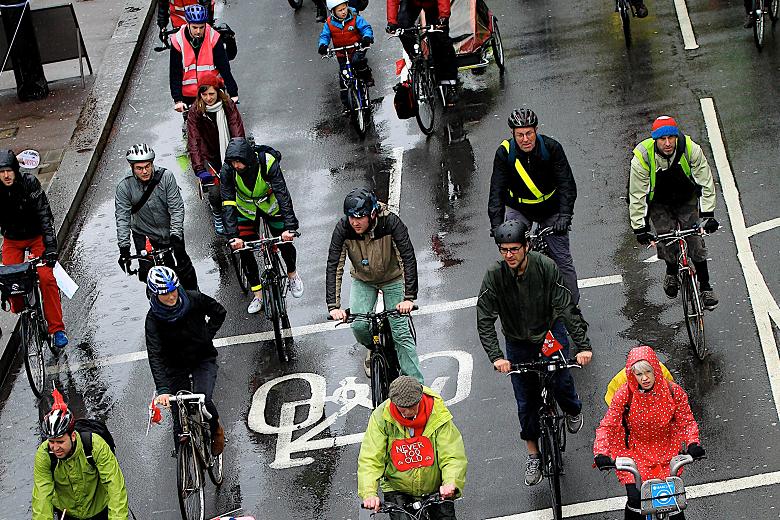 From the BBC: Trying to make sense of the spate of cycling deaths

“vehicles have huge blind spots and can’t see cyclists down the kerb side…The solution, say campaigners and City Hall, is to build segregated junctions but that will take time.”

Yes, rather than encourage people not to put their squishable human bodies in the pathways of the stampeding herds that is London’s road traffic, let’s spend a colossal amount of money rebuilding London’s road junctions to fractionally improve their chances of not dying horribly. The logic of that! It’s like removing the stingers from thousands of wasps one by one instead of telling people who are getting stung to stop hanging around wasps nests.

But seriously, five cyclists in nine days have died. That is tragic. My question is: for what did they die? What is the fundamental reason why they chose to do something as dangerous as cycling around a car-orientated city? Was it out of concern for improving their health? If it was, then city cycling isn’t the wisest course of action because there’s plenty of ways to get fit which don’t also greatly increase your chances of dying or suffering serious injury. Choosing the one that does demonstrates a lack of concern for your own life or at least a willingness to take much greater risk with it. So it can’t really be a genuine concern for health that’s motivating it. No, it’s something else, there’s a deeper motivation, and I think the most likely candidate is the ‘green’ ideology/movement, which is centred around the false premise that global human catastrophe will result in less than a century unless we drastically and immediately reduce the amount of CO2 we are putting into the atmosphere. False premises always lead to false conclusions. False premise: a global-warming human catastrophe looms. False conclusion: we must direct all our effort and resources towards facilitating cycling and to discouraging/penalising the use of vehicles. Hence hair-brained schemes such as rebuilding thousands of road junctions and even banning heavy goods vehicles from entering the city centre. No doubt more such schemes will be urged by campaigners, ‘experts’ and City Hall in the near future. I wouldn’t be at all surprised if in the near future cars in central London will be forced to drive below 20mph at all times or banned altogether from using some roads between certain hours of the day or even at all. It would take a brave man to bet that the freedom to drive a petrol car whenever and wherever one wants to will be severely diminished over the coming decades and an even braver man to bet against whole swathes of London roads being made the exclusive domain of cyclists.

If religion has taught us anything it’s that believing in things that aren’t true can sometimes lead you to take self-destructive or otherwise harmful courses of action. Participating in or partaking of any process that involves the emission of CO2 has become a sort of secular Original Sin. When you use more electricity than you ‘need’ to it’s a sin, when you drive to the corner shop instead of walking or cycling, it’s a sin.  As the Pet Shop Boys once sang:

“Everything I ever do,
Every place I’ve ever been,
Everywhere I’m going to,
It’s a sin”

If emitting CO2 is the new Original Sin, then being squashed by a lorry must be the secular equivalent of being nailed to the cross; sacrificing oneself on the roads of London for the good of humanity, what could be more noble. Truth, as they say, is often stranger than fiction and nothing is stranger than the fact that a carbon-based life-form has declared carbon as immoral.