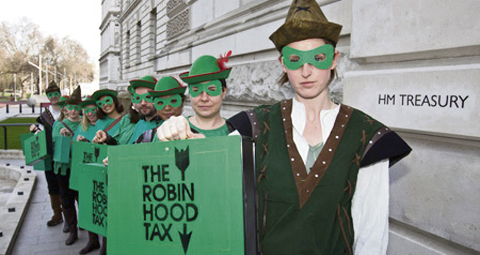 The ‘Robin Hood Tax’ campaign started up here in the UK a few years back and has built up quite a head of steam, with several celebrities lending their faces and dulcet tones to the campaign’s posters and videos. A sister Robin Hood Tax campaign has also now sprung up in America.

Here’s what those behind the Robin Hood Tax say:

“A Robin Hood Tax is a tiny tax on the financial sector that could generate billions of pounds annually to fight poverty and climate change at home and abroad. Small change for the banks – big change for those hit hardest by the financial crisis. Also known as a Financial Transaction Tax (FTT), a Robin Hood Tax is a tiny tax of about 0.05% on transactions like stocks, bonds, foreign currency and derivatives, which could raise £250 billion a year globally. FTTs are well-tested, cheap to implement and hard to avoid.”

Admittedly on first consideration it sounds like a great idea with no obvious drawbacks, but then, so does socialism – the disasters of which we’re living through right now – and so let me quickly present the two-pronged argument against the Robin Hood Tax, which doesn’t leave it a leg to stand on. Firstly, the argument from philosophy/principle.

Robin Hood, as legend has it, ‘stole from the rich to give to the poor’. This isn’t true because in fact the money he took from Lords and Ladies at bow point was produced by the agricultural labourers bound (forced) under the feudal system to work on their estates. Therefore it was the Lords and Ladies who stole it in the first place, Robin Hood, was merely putting it back in the hands of its rightful owners at great risk to himself. Whether he took it upon himself to act on behalf of serfs or he was contracted to is not clear.

What the Robin Hood Tax proposes is literally to systematically steal from those who work in the financial sector who, leaving aside for the moment the inherent immorality of the government-created global banking system in which those individuals have no choice but to operate, have never forced anyone to work for them or stolen the wealth produced by others.

Thus The Robin Hood Tax campaign has misappropriated the popular legend of Robin Hood, who did not steal, in order to disguise their proposal to steal from innocent people.

Furthermore, it’s hardly principled to ‘give to the poor’ by actually stealing from the rich. Helping someone by first harming someone else is not virtuous, it’s a kind of moral schizophrenia. As American satirist H.L. Mencken once put it: “”When A annoys or injures B on the pretense of saving or improving X, A is a scoundrel.”

They warn that “a sole implementation of a Tobin tax by the UK would be economic suicide [their emphasis]” and cite that: “Sweden is the only country to have tried a ‘pure’ Tobin tax, of 0.5%. It raised only one thirtieth of the proceeds predicted by its proponents and was scrapped after five years. The taxes sparked an exodus of financial activity from Sweden. By 1990 60% of the trading volume for the top 11 most traded Swedish stocks had moved to London. Trading for over 50% of Swedish equities had moved to London by 1990.”

They go on to say: “The claim by supporters of a ‘Robin Hood Tax’ that £20 billion annually can be removed from the UK financial sector without causing significant disruption is ill-informed and reckless. This recklessness is augmented by the fact that we are emerging from one of the most accentuated cycles of boom and bust to date.”

So, there we have it, the Robin Hood Tax is unprincipled and as a course of action to achieve a goal, very much mistaken. I’m convinced the people behind it have good intentions, but that’s no guarantee that your actions won’t have the worst of consequences. All that’s left to do is to implore those who support the Robin Hood Tax idea to take time to consider the argument from principle and the argument from economics against the Robin Hood tax, and hope they find the courage to adjust their convictions accordingly. I know it’s really hard to resist ‘going with the flow’ when the majority of the world’s mainstream economists and media support the idea, but as W.C. Fields once told us: “Remember, a dead fish can float downstream, but it takes a live one to swim upstream.”