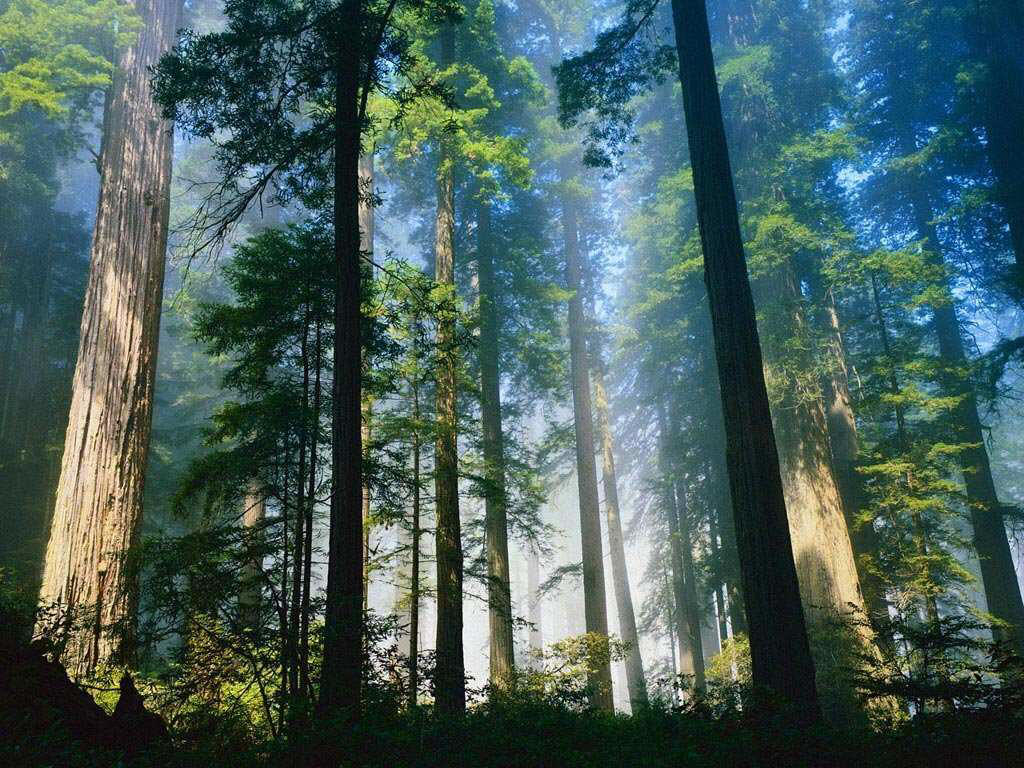 There was once a nature-lover who had a forest of talking trees. One day he walked amongst his beloved trees, sat down on the earth and looked around. After a while he stood up in a manner which suggested a decision had been made.

“My beloved trees,” he declared loudly. “I feel that it is not fair that some of you cannot grow to your fullest potential because of the bigger trees who block your light and gather your rain. Therefore I shall take action to bring equality to your community and the forest as a whole shall benefit.”
“Now you mention it, why should I miss out on all the lovely sunshine because of Mr Big over here?” responded one of the smaller trees thoughtfully.
“I agree,” remarked a fellow smaller tree, “it’s not fair. They’ve always been bigger than us, we don’t stand a chance. If we had the same amount of sunshine and rain they get, then we’d be as big and productive as they are.”
“That’s true!” said a voice from somewhere in the distance.
“I never thought of it that way!” said another.
“They just got the lucky breaks!” shouted another.

The bigger trees said nothing. Some threw glances to their peers that seemed to be searching for the same inexplicable self-doubt they were feeling; their collective silence formed a question: perhaps we have been selfish?

The nature lover raised his hand as if to acknowledge the anguish of the smaller trees and then placed it onto his chest to indicate he was speaking from his heart. he spoke solemnly with his face lowered.
“I know, until now I have failed you, I have failed all of you in the forest.” He paused for a moment before quickly raising his head to reveal eyes contemplating a beautiful inner vision. “But no longer my friends, by working together and for the greater good we can achieve equality and give every tree a fair chance.”

A chorus of euphoric cheers broke out amongst the smaller trees and in that moment how the bigger trees were perceived by the smaller trees transformed. Before they had always looked proud and magnificent, which had seemed to be the only way they could be perceived, but now they looked arrogant and lordly; they seemed to loom menacingly over their smaller cousins who were now wondering how they could possibly have been so foolish as to have perceived the bigger trees any other way.

“But how can just one man do so much?” said a voice, which came from somewhere behind the nature lover, whose question consisted of confusion and optimism in equal parts.

The nature lover smiled as if answering the simplest of questions asked by a child and said, “I have the tool.”

Standing outside the forest was an old man with passive eyes who had been listening to the conversation between the nature lover and his trees. He sat down on the felled trunk of a once mighty tree with the same certainty as someone who waits for the tide to come in.

The old man watched on the day the nature lover emerged from his forest, head bowed, axe hung limp in his hand and his limbs plodding wearily. He watched as the nature lover’s eyes filled with a pain so immense it seemed to physically attack his body and he slumped to his knees under the weight of a realisation that he felt would destroy him. The old man knew what that realisation was, it was the reason he had sat on the felled trunk of the once mighty tree. He surveyed the nature lover’s forest with eyes that had known unimaginable pain once before and had outlived it.

He looked at a decaying forest of half trunks and half-alive trees, all more or less of equal stature; a forest void of the bustling of life forms and layered in a grave silence. He peered into the absence of the proud and magnificent trees that once provided a wealth of food and habitats that a microcosmic world of life could utilise; that once provided shelter and nourishment for the smaller trees and plants; he surveyed the absence of a variety of trees of all sizes coming together to produce the effect of a complex and bountiful forest. The old man bowed his head as if in mourning. He summoned a memory of that bountiful forest which had once existed where this pitiful collection of struggling life now did, as if to reassure himself of something. With that same reassurance he walked over to the nature lover and placed his hand on his shoulder.

“How did this happen?” cried the nature lover when he understood the meaning of the old man’s touch.
“It’s hopeless!”
“look what we’ve done!”
“There is hope,” said the old man softly.
“What hope is there? What can be done? Life is impossible! There can be only suffering!”
The old man removed his hand from the nature lover’s shoulder.
“The solution is simple,” he said with his gaze fixed somewhere distant, as if lost in the depths of his own wisdom.
The nature lover looked up and revealed a soul choking on pity, despair and remorse that was desperately hoping that what the old man was about to say would save it.
“Put down your axe.”
The words seem to breathe air into the lungs of the nature lover.
“Put down your axe and leave this forest for ten years.”
“And then?”
“And then return to this place. I will be waiting for you.”

The old man gestured to somewhere distant and the nature lover felt he was being given permission to walk away from his torment, self-pity and self-loathing, and so he did.

Ten years later the nature lover returned and saw the old man sitting on the fallen tree trunk in exactly the same place, as if he had not moved since they last spoke. He noticed that the tree trunk was much more rotten and decayed and that the old man’s face was even more deeply inscribed with lines. In his mind he acknowledged that the tree trunk looked weaker, but the old man somehow looked stronger. The old man did not look up as the nature lover walked past him and into the forest. Several moments passed before he emerged and sat down next to the old man.
“It’s beautiful,” he said, as if in confirmation to a question the old man had asked without speaking.
“Where is your axe?”
“I … I don’t know.”
“I do,” replied the old man and gestured to the other side of the tree trunk. The nature lover reached back and felt his hand close around the handle of the axe he abandoned a decade ago. A puzzled look crept over his face.
“Why did you keep it for me?”
“As a reminder to never use one again.”