Unlicensed does not equal unethical 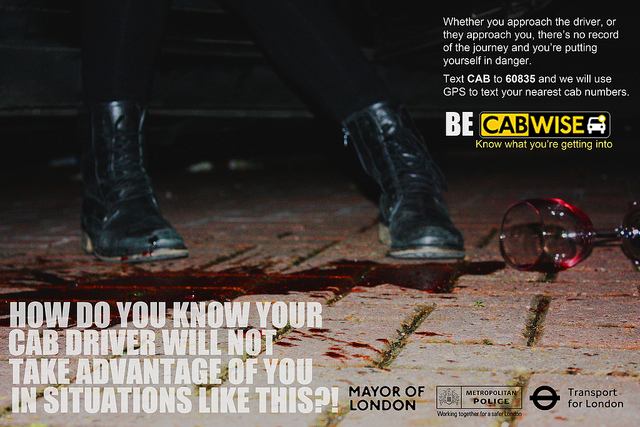 Since November 2010 there has been a poster campaign at London Underground train stations that (according to Transport For London) is designed to “…warn Londoners about the dangers of getting into unbooked minicabs.”

According to the Tfl website these posters are part of a “wider-reaching” campaign which also includes “…online messaging and adverts played in late night venues” and which is a joint initiative between the Mayor of London, Transport for London, the Metropolitan Police and the City of London Police. There are various designs with different messages including one which shows the terrified face of a woman on the back seat of a car, suggesting that she is being sexually assaulted or attacked in some way. however, the one I’m going to discuss is one that I have I noticed at my local station, which says, “If your minicab’s not booked, it’s just a stranger’s car.”

Government campaigns like this one appear to be benevolent and created for the good of the people, but the ulterior motives that lurk beneath can be exposed with logic, rational-thinking and understanding of the way The State profits from regulation and licensing of the taxicab industry.

Firstly, I will quote some more text from the Tfl website because it’s crucial to define exactly what the claimed rationale of the creators of the campaign is. This is what they wrote:

“The campaign aims to make the public, particularly women, aware of the dangers of picking up unbooked minicabs off the street, as well as informing them of the best ways to get home safely.

Any minicab that isn’t booked through a licensed minicab operator is dangerous and puts you at risk of attack, including sexual assault and robbery.

Minicabs lined up outside pubs and clubs are breaking the law if they accept your fare without a booking being made first.

So, let’s start by using some basic rational-thinking to work out what is true, what can be reasonably accepted as likely to be true and what is false.

The format of the message on the poster is such that it implies two things. Firstly, that the opposite is true – i.e. “If your minicab’s booked, it’s not a stranger’s car” and secondly that ONLY booked cabs are safe. The first is false because a stranger is defined as “any person whom one does not know” (Collins) and regardless of whether you use a booked or unbooked cab, the driver is always a stranger by definition. This fact is also what makes the poster’s claim true of course. The second is false because crimes have been committed by licensed cab drivers. The proof of this is not hard to find, a simple search on the Internet brings up news articles on assaults, sexual or otherwise, committed by licensed cab drivers. A recent example is that of former licensed black-cab driver, John Worboys, who in March 2009 was found guilty of 19 charges of drugging and sexually assaulting 12 female passengers over an 18-month period.

So, the poster’s message at the surface is a simple statement of truth, but the hidden implications entangled in the underlying logic are false. Any statement that enables false conclusions to be inferred is worthy of scepticism and should be treated with suspicion.

Let’s look at the assertion that “Any minicab that isn’t booked through a licensed minicab operator is dangerous and puts you at risk of attack, including sexual assault and robbery.”

Again, what’s required here is to pick through the treacherous language and extract truth and falsehoods. The assertion that any unlicensed cab is dangerous is false. If it asserted that any unlicensed cab CAN be dangerous, then this would be true. Although it would also be true to say this of licensed cabs. They didn’t use the word ‘can’ because it robs their false assertion of its impact.
The term dangerous is subjective and relative of course, so it is useful to ask the question: compared to what? We could ask: unlicensed cabs are dangerous – compared to what? A satisfactory answer to this question in this context could be: unlicensed/unbooked cabs carry relatively more risk than licensed/booked cabs, but both can be dangerous. We would be able to centre on a more precise answer if we had a figure for the percentage of people who took unlicensed cabs (in 2010, say) and who were victims of crime as a direct result, and the same stat for people who took licensed cabs. Such data is seemingly not easily attainable and I have not been able to find anything like it available on the Internet. In the absence of statistical data I will use personal experience.

Over the years I have taken unlicensed cabs home on countless occasions and have not had a bad experience. I know at least 3 other people who could say the same and if you walk through central London late at night, you will see that a great many people use unlicensed cabs. Therefore, I think it would be reasonable to assert that a small percentage of those who use unlicensed/unbooked cabs are victims of crime as a direct result. I think it would also be a reasonable to assert that the percentage would be smaller for licensed/booked cabs. These two assertions cannot be proven (at least to some degree) without statistical data of course, but they are based on reason and rationality.
You only have to look at the world around you to see that most people aren’t rapists or robbers and that the vast majority of people who use unlicensed cabs do not get raped or robbed.

Tfl’s assertion that any unlicensed/unbooked cab is dangerous and puts you at risk of being raped or robbed, which doesn’t contain enough information and is therefore nowhere near accurate enough.
Describing a relatively unlikely event as a near certainty is a process otherwise known as scaremongering or propaganda.
What about: “Minicabs lined up outside pubs and clubs are breaking the law if they accept your fare without a booking being made first”? Well, this is true. The relevant laws exist, therefore they are indeed breaking the law. In my view the intention here is to make you equate law-breaking with evil. But we must be clear in our minds that law-breaking is not always synonymous with acting unethically. For example, breaking into someone’s house to rescue them from a fire is illegal in the eyes of the law, but virtuous in the eyes of most people. I’m not suggesting unlicensed cab drivers waiting outside night clubs do so because they love taking drunk folk home, of course not; they’re there because they know people are prepared to pay to be driven home. I don’t think many of us would consider that immoral or unethical, but whoever did would would have a difficult argument to make.

“You should not approach minicab drivers, and any minicab driver that approaches you on the street anywhere is acting illegally.” Again, the intention here, in my view, is to equate illegality with immorality. The sentence, “Do not get in” has been separated from the preceding sentence to which it relates, which has the effect of turning it into an even more chilling warning of some mysterious impending doom. The message is clear: You’re going to be raped!

So why the treachery, exaggeration and falsehoods? Why so much effort to make people fearful of using unlicensed/unbooked cabs? The answer is money and power. Unlicensed cabs, in other words people who offer to take people home in their car in exchange for money, are only subject to the normal regulations all vehicle owners are subject to. The government has little control over them and therefore they can’t engineer more profit. In contrast, all licensed taxi and private hire vehicles are subject to an astonishing array of legislation, non-compliance with which is punishable by fines of varying amounts – and that means much more profit. Here’s a list of the legislation acts licensed taxi and private hire vehicles are subject to:

This astonishing amount of legislation (each act with its own catalogue of ‘offences’) is simply the manifestation of coercion and the forcing of the will of those in power onto others. When you can control people like this and back up your threats with a police force and prisons, power and profit are the rewards. The fines for non-compliance with legislation range from a minimum of £200 to a maximum of £5000, and of course if the fines aren’t paid then imprisonment follows; which is the threat of violence required to ensure that cab drivers comply.
For example, forging a licence or badge is punishable by an unlimited fine and imprisonment for ten years under the Fraud Act 2006, and the Forgery and Counterfeiting Act 1981. That’s a decade in a jail cell for the victimless ‘crime’ of forging a piece of paper that a group of people (government) have declared to be a ‘licence’. It’s crucial to realise that this piece of paper is just a piece of paper, it’s meaningless in reality. This arbitrary piece of paper only has ‘meaning’ when those with the power to control others and to initiate violence declare, “this piece of paper is a cab driving licence. You must buy one from us to be a cab driver or else we’ll steal your property or kidnap you and through you in jail. It’s exactly the same as if the Mafia forced local bar owners to buy a Mafia produced ‘bar licence’, which could simply be the word ‘licence’ written on the back of a beer mat. If the bar owner refused, then they would get their legs broken. This Government racket is on a scale the Mafia can only dream of and, best of all, everyone believes it’s a good thing! Oh, what the Mafia wouldn’t give…

Here’s another example, “If a driver knowingly plies for hire with an unlicensed taxi or is on any stand with an unlicensed taxi, he commits an offence.” The fine for that is £2,500.
There is of course no way of finding out how much money the government makes from licensing and legislation, the actual figure is largely irrelevant anyway, because I’m certain we can rest assured that it’s a tidy sum.

With this knowledge the real motives behind seemingly benevolent government behaviour becomes sickeningly obvious. The existence of unlicensed cabs reduces the amount of profit made from taxi legislation and licensing. The government has somewhat of a catch-22 to deal with though, which is that their legislation and licensing results in licensed taxi drivers charging higher fares to cover their costs and make a profit – which in turn results in more people using cheaper unlicensed cabs. So the government has to moderate its desire to increase profit because if they go too far with legislation, then their efforts will have the opposite effect. Given that the previous government greatly increased taxi legislation already in the past few years, this government couldn’t get away with creating even more legislation at the present time, and so campaigns like “Safer Travel At Night” are deployed as an alternative method of increasing profit. If they can convince enough people that unlicensed cabs are all driven by rapists and create a pervasive paranoia of them, then it’s likely they will see an increase in profits.

I hope now that whenever you see one of these nonsense posters, you will remember that it’s merely a pitiful attempt by a minority of sociopaths to grab more pennies from you; and instead of being manipulated to feel fear you simply laugh and walk away with your rational grip on reality intact.